Home Books A book that those who love Nigeria should read

A nation in crisis, a nation in need of a breather

Title: This Present Darkness – A History of Nigerian Organised Crime

Broken into 11 chapters, Stephen Ellis has written a most educative book that should interest those who seriously want to understand the Nigerian condition.

And to elaborate is the fact that some of the headings and sub-headings that the author has chosen to segment his narrative are indeed quite telling.

Beginning with an examination of the pre-colonial and colonial eras, the author, who has worked across Africa since 1971, starts by examining the ‘rules of law’ that the colonial enterprise met and tried to work around.

He dissects the half-truths involved in the notion of colonialism as a ‘civilising mission,’ the politics that led to the introduction of the system of ‘Indirect rule’ and the early outlines of alienation that suggested that in the fluid field that had now emerged in the country on account of the colonialist disruption, the soil was inadvertently ripe for the flourishing of ‘schools for deception,’ a field of ‘wonder workers,’ a professor of wonders’ and notions of ‘wealth, risk and destiny’ that demonstrated that indeed ‘a hollow system’ was what the colonial intervention may have produced at best.

Tied to this, our author equally notes, was the introduction into the political arena of the lexicon of ‘the national cake’ and notions of cake-sharing ahead of ‘Independence.’ But even the promise of independence also came paradoxically with the rise in the incidence of ‘the foreign contribution’ to the now settling perversions that continued to manifest themselves in different forms on account of the inchoate political and social developments that were manifesting all over the place even as ‘corruption spread to the daily life’ patterns of the people.

Almost inexorably, ‘the men in uniform’ came into the picture and a flurry of ‘coups  and counter coups’ were to be witnessed. It was also at this time that the issue of bumper oil revenues (aka windfall) came to the fore but not without ‘the new criminality’ that was equally being witnessed in this ‘boom time.’

As matters developed the nation began to experience a situation where it started attracting a reputation of being a ‘rampant’ field that was awash with ‘corruption, crime and cults,’ a situation that the return of civil rule and inauguration of ‘the Second Republic’ was not to also abate. And as a result ‘crime went global’ manifesting its presence in ‘the drug trade,’ ‘419’ and ‘the rise and fall of anti-corruption.’

These were also not being helped by the manipulation of ‘ethnic issues’ and the antics of emergent ‘godfathers.’

Another point made by Ellis in his clearly very heavily researched tome (the appendixes and notes make up about a third of the pages) is the fact that the interruptions in the political order by the military may have equally compounded the nation’s challenges. He calls particular attention to the ‘Babangida’ era which he sardonically describes as one in which ‘another criminal arrives.’ As things got worse, the boom referred to earlier was deflated with ‘Oil wealth being looted’ and ‘democrats becoming kleptocrats’ whilst ‘the business of crime festered and ‘crime was now being established as a regular career.’

Some of the specific outlines of these criminal distortions are listed to include the emergence of ‘the king of 419,’ a spike in the abuse and trafficking of ‘drugs,’ and ‘sex work’ which was now being carried out with a stronger sense of confidence and ‘organisation.’

The ‘cosmic powers’ dimension of the crisis explored in the text has also seen the discourse veering off to incorporate issues of ‘cults and shrines,’ with ‘the Okija shrine’ in Anambra State registering as a notable spot in this conflated scenario of ‘Law versus Reality’ and ‘Religion and self-fashioning.’

Ellis rounds off his richly researched and heavily annotated text with a perspective view on what he calls ‘Nigerian organised crime.’ In this section he discusses subjects as ‘State crime,’ ‘Why Nigeria?’ and ‘Nigeria crime in globalisation.’

Ellis has put a lot of cards on the table. The challenge now is to build on it. And as the reader runs through the text, one thing he is sure to find is that even if some of the conclusions may not be acceptable to him or her, there is no gainsaying the fact that, just based on the facts documented in the book, there may very well be a sense in which ‘this Oyibo man don see us finish!’ 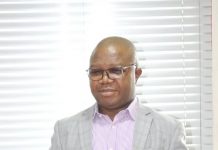