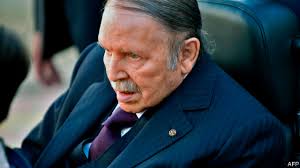 For embattled Algerian President Abdelaziz Bouteflika, it is no longer whether, but when he would leave office.

And it could indeed be any day now following Wednesday’s disavowal of his continued stay in office by, among others, his own party chief,
Moab Bouchareb.

Bouchareb who is the interim leader of the ruling Front for National Liberation, FLN, has endorsed the ongoing popular protests to bring an end to the Bouteflika era.

His disavowal of Bouteflika is coming on the heels of a similarly most notable affirmation by Army Chief, Lieutenant General Ahmed Gaed Salah that the ongoing protests could not be faulted as the protesters had noble intentions.

Even as Bouteflika has largely been indisposed in the past six years, a shadowy cabal has continued to rule in his name.

Matters came to a head recently when the cabal contrived to put the ailing President’s name on the ballot once again ahead of the now rescheduled April presidential polls. The country could take it no more and students, doctors, teachers, professionals, labour and women have since taken to the streets to force the regime’s exit.

INEC on the ropes over high-stake supplementary polls