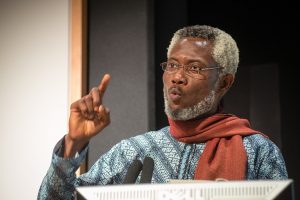 Author and advocate, Chuma Nwokolo has stated that his BribeCode project will help resolve some of the critical problems confronting the African continent today.

He was speaking in Lagos, Thursday at the November #FocusNationAfrica summit convened by the pan-African newspaper, The Difference and held at the Resource Center of Ignite Africa Leadership Foundation.

Noting that the campaign may have already begun to attract some traction (though distorted) in Nigeria where it began, he revealed that the recent introduction of a payment scheme for whistle blowers who squeal on acts of corruption that they have knowledge of is one of several policy proposals contained in the code which had been submitted to government since 2015.

According to him however, rather than adopt the totality of the code, the administration isolated only the whistle blowers reward component and not the other proposals that called for the liquidation of indicted businesses and the forfeiture of all of their assets.

Even in the whistle blowers reward scheme, he noted that rather than adopt the one percent flat rate outlined in the code, government has preferred to adopt a floating negotiable rate which according to him, may even further lend itself to even more corruption!

Agreeing with the organisers of the parley that some of the extant problems plaguing the nations of the continent of Africa cannot be resolved simply by implementing reform packages in the individual nations of the continent, he called for a more robust and pain-staking strategy of empanelling continent-wide solutions towards the resolution of such problems.

Giving the example of Equatorial Guinea which has been trapped in the iron-fist rule of a single despot for some four decades, he stated that it was now necessary to find ways of addressing such situations through the adoption of broader legal control systems that would not just allow whole masses of people to be so helplessly trapped.

Nwokolo, who disclosed that travelling across Africa was his passion and that he had presently made it to about 16 countries within the continent, lamented the hurdles presently imposed on Africans through the institution of the ‘border post,’ an obnoxious colonial creation that has made it difficult for fellow Africans to travel seamlessly within the continent.

Nwokolo also noted that the colonial encounter had left us with an alienating effect in the mould of isolated national languages that made it difficult for Africans to freely interract and trade with one another, and asked African states to make it a point of duty to encourage citizens to traverse this gulf through consciously promoting a new educational order where citizens, say from Anglophone speaking nations, are encouraged to learn and speak languages like French and Portuguese that are used as national languages in their neighbouring states.

In his contribution, the banker-blogger, Oluwole Sheriff Olusanya noted that there was indeed the need for African nations to continue to share experiences with a view towards learning from each other and even strengthening areas of cooperation. In this wise, he noted that Angola like Nigeria has had its own share of conflicts even as it was equally heavily dependent on a single primary export commodity, oil. He also noted that just like is the case in Nigeria, only a negligible percentage of the population of the country sit atop the vast wealth of the nation with Isabel dos Santos, the daughter of the immediate past President, registering as Africa’s richest woman.

He however also paid tribute to the Southern African nation’s stock of beautiful beaches and tourist attractions that he encouraged other Africans to visit and thus further enhance intra-African travel and trade industry.

Declaring the event open, Executive Director of The Difference, Mr. Tony Opara outlined that the #FocusNationAfrica event is a monthly pan-African consciousness-raising activity that marks the national day of a designated focus nation even as it discusses issue of a broader pan-African concern.

For the month of November, the nation of focus is Angola and the theme of the day ‘Boosting Intra-African travel: Experiences, Lessons and Proposals.’

The next #FocusnationAfrica event has the East African nation of Kenya as country of focus and would hold in Lagos on December 12, 2018.