With confirmed cases now recorded in Egypt, Algeria and Nigeria, there is increasing concern over the Coronavirus pandemic in Africa, The Difference checks have revealed.

Nigeria’s confirmed case, a lone one as at the time of going to press was reported in Lagos on Thursday.

It involves an Italian who is engaged on business projects in neighbouring Ogun State and who upon discovery has since been transferred to a control centre in Yaba, Lagos.

On the streets of Lagos, many are talking about the situation with a lot of queries going to the authorities to confirm and reassure members of the public that everything is being done to ensure that the situation is brought under control.

Health Minister, Osagie Ehanire has also briefed the nation on the incident and given an update of what the government is doing to control the situation.

And from East Africa, a court has given an order that flights between the nation and China, where the virus is widely believed to have originated, should be temporarily suspended. This was in response to a suit filed by the Kenya Law Society. 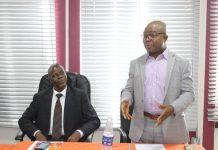