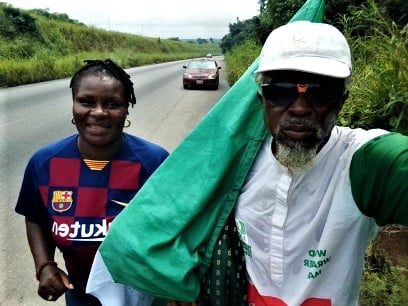 For 17 days and counting, Godwin Adjarho Obaro, aka World Wrapper Man, has been running Nigerian roads, streets and by-ways. Beginning from his Lagos base and going through all of the states and towns on the route, his destination is Onitsha in Anambra State and as at yesterday evening, he had made it to Agbor, leaving him with Umunede, Asaba and Onitsha. Hopefully, at the close of today or at the most, Saturday, the approvimately 650-kilometre run would have been concluded.

The Delta-born, former student of Government College Ughelli, has almost always loved to run. And now he is running with a specific passion: he is bothered over the high levels of piracy that continues to hobble the efforts of creative workers and the creative industry in Nigeria, and wants to make a dent in the obnoxious chain.

Now let us make no mistakes about this. One run will not end piracy, but for a seemingly deeply ingrained scourge like piracy in Nigeria, the blows need to keep coming to make any sizeable impact. And this is where Obaro run is most helpful.

When the race is over, Raphael James, the very energetic biographer, researcher, adventure buff and bibliophile, whose Centre for Research in Media Management and Development, CRIMMD is one of the partners of the project (another is the Nigerian Copyright Council, NCC), says that the World Wrapper Man would address a World Press Conference on his preparation and motivation for the project. At the moment however, we can locate three:

One, Government College Ughelli, GCU: In the 1980s when World Wrapper Man was a student at Government College Ughelli, the school which had been established by the colonial authorities in 1945, not only had and sustained lavish sports infrastructure (four word class football fields, an Olympic-size athletics pitch, several basketball, cricket, volleyball hockey and basketball pitches, etc in addition to a sports lawn that abutted each of the 9 students hostels), sports was a daily and regular part of the school fare. To its almost natural credit then, the school has gone on to produce several notable Green and Super Eagles players, national athletes, cricket team stars and counting. Obaro was most inevitably inspired and helped along by his GCU roots.

Two, Obaro has been involved in the marathon circuit within the country and beyond for very many years.

Three, the World Wrapper Man has similarly been identified with the arts over the years and this writer had encountered him in the past at one or more of the sessions of the Committee for Relevant Art, CORA.

Finally, his running gear: World Wrapper Man runs adorned in his wrapper, which sometimes is the full-length 18 plus yards wrap. This indeed is a clear tribute to his Niger-Delta heritage where over the years, the wrapper has come to be established as a regular cross-gender feature of the people’s dress code.

Here’s looking on to a great finish.

Lessons and takeaways from the World Wrapper Man run

NCC is beginning to revive

For years, the Nigerian Copyright Commission, NCC was largely comatose. Now under its new Director, Dr. John Asein, the body seems to be reviving. It is presently engaged in a nationwide series of sensitization sessions on anti-piracy along with stakeholders like the Nigerian Publishers Association and the Booksellers Association of Nigeria. It has also given institutional support for the World Wrapper Man’s run.

PMAN joined in in Benin

At the Benin stop, the Performing Musicians Association of Nigeria, PMAN joined in the race and hosted a mini-reception for Obaro at New Benin Market.

The Police can be your friend!

After a ‘scuffle’ of sorts in Omotosho, Ondo State where the World Wrapper Man had preliminary trouble persuading the DPO about the nobility of his cause, the Police authorities sent out word to their operatives on the route to be more accommodating and helpful. No other incident has been recorded this far.

Understanding the scope of the problem

Piracy is a huge scourge that robs Nigeria of billions of naira annually. It is a major problem that cuts across the books, music, movies and related components of the creative industry. And it has become so all-pervading that even when many of the operational centres of the suspected pirates are known to all, they are scarcely raided any longer! Even more troubling is the fact that upon being possibly apprehended and successfully prosecuted, the fines imposed by the law for pirating some creative products are disappointingly so meagre that the convict could simply open his wallet, pay and walk away!

Popular attitudes and the day after

Here indeed is ‘where the tubber meets the road! ‘Why is he running? Will running end piracy?’ These are some of the questions being raised by Nigerians for whom charity exercises like this are not exactly a regular fare in the sense that it is coming. To provide answers for their queries and advance the cause of anti-piracy going forward, stakeholder groups and other interests should see the World Wrapper Man race essentially for what it is, a catalyst that they must yet build on in many other respects.

Picture: World Wrapper Man, David Adjarho Obaro. Running alongside him is Mts Chukwuemeka Duru. Her husband, Mr Duru is driving along in the back-up car.

Poverty on the prowl