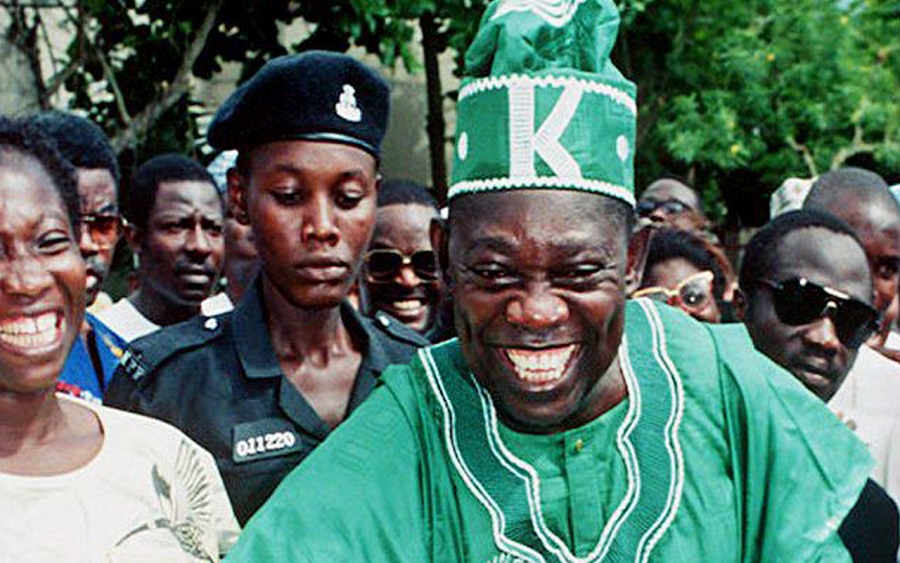 In a matter of hours it will be another celebration to mark June 12, the date agreed by many Nigerians as the most appropriate day to celebrate Democracy Day.

It was on that day in 1993 that Nigerians set aside religious and ethnic bias to vote two Muslims as President and Vice President of Nigeria in the persons of Chief Moshood Kasimawo Olawale Abiola and Alhaji Babagana Kingibe, both of the Social Democratic Party (SDP).

The campaign was colorful and in the elections proper Nigerians trooped our to cast their votes in the open. Professor of Political Science from the University of Nigeria (UNN), Nsukka, Humphrey Nwosu had experimented with a voting system where people queued behind their candidates to be counted.

At the beginning, everything went well and the National Electoral Commission (NEC) that Nwosu was presiding over even rebuffed an attempt to use the judiciary to disrupt the elections. A hastily formed innocuous body called the Association for Better Nigeria (ABN)  led by Chief Arthur Nzeribe and Abimbola Davies attempted to torpedo the election. This story is a comprehensive rehash of all the high wire politics of the time but suffice it to say that the ‘evil genius’ and Nigeria’s maximum ruler, General Ibrahim Babangida annulled the election using the controversial judiciary ruling as an excuse for his action.

As would be expected, his move sparked off riots nationwide as Nigerians told him in no uncertain terms that they would have none of the nonsense. Economic life ground to a halt as demonstrations went on unabated. General Babangida, to save face, quickly cobbled together an interim government under the leadership guru, Chief Ernest Shonekan, who was then Chairman of UAC.

Though, Shonekan hailed from Ogun State as Abiola but if Babangida thought he would use the appointment to assuage the Yoruba he was mistaken. Rather than be assuaged, the Yoruba elites were in the forefront to validate June 12.

As matters came to a head, General Sani Abacha, who had been left behind by Babangida to hold things in check, quietly eased out Chief Shonekan in a bloodless palace coup and took over the reins of power. By this time, the world had declared military rule as an anomaly and Nigeria was a pariah nation.

Again all this historical excursion is not the purpose of this piece. Both Abiola and Abacha died in different circumstances which kind of laid certain matters to rest. There were also other mystery deaths, including those of General Shehu Musa Yar Adua and Kudirat Abiola even as the nation passed through a very dark era.

Eventually, Abacha himself was equally to die in strange circumstances. His successor, General Abdulsalami Abubakar was not one cut in the mould of a dictator even as a lot of the foundation for continued military rule had been massively damaged. He quickly then organized a return to civil rule programme.

The elections that he organized with the help of the reconstituted Independent National Electoral Commission (INEC) saw the emergence of former Head of State General Olusegun Obasanjo as President with  Alhaji Atiku Abubakar as Vice President. They were sworn in on May 29th which became the putative Democracy Day.

Throughout Obasanjo’s tenure, efforts were made to get the government to honour Chief Abiola as well as move Democracy day to June 12. The argument then – which was logical – was that but for Abiola there would probably have been no democracy to celebrate. Chief Abiola, a business mogul paid the supreme price for democracy as the Abacha junta had arrested and locked him up after he declared himself President at Epetedo, a suburb of Lagos. That outing was Abiola’s last in public as he died in prison.

Until today, many Nigerians believe Chief Abiola was poisoned by American diplomats who came to negotiate his release. Even the then UN Secretary General, Mr. Kofi Anan was among world dignitaries that were in Nigeria to negotiate Chief Abiola’s release. However, it was in the heat of the moment that Chief Abiola died and about a month afterwards, General Abacha also died.

While Obasanjo refused to do anything to honour Abiola his successor, Alhaji Umaru Yar Adua didn’t live long enough to do anything. The lot fell on President Goodluck Jonathan to immortalize Chief Abiola, who was widely acclaimed by Nigerians as winner of the historic June 12, 1993  Presidential election. Dr Jonathan renamed the University of Lagos after Abiola but the move or action met with stiff resistance by both Yoruba elites and students who insisted that it would be a disgrace to name the great University of Lagos after Abiola. They argued that being a lover of football and the Pillar of Sports in Africa, the National Stadium should rather be named after the late politician.

President Jonathan to make peace dropped the idea and Unilag remained Unilag. When President Mohammadu Buhari became President in 2015, the agitation for honouring Chief Abiola resumed. Yinusa Ajimobi, a teacher based in Lagos says it was appropriate to change Democracy Day from May 29 to June 12 to reflect what had happened on that day. This view is shared by Mrs. Yemisi Okalawon, a business woman who says May 29 represented nothing when many Nigerians agree that without June 12, there would have been no May 29.

In all of this, one remarkable event that many Nigerians probably glossed over was the emergence of Alhaji Babagana Kingibe, Abiola’s Vice President as a key member of the cabal that controlled Aso Rock. To assuage the Yoruba and buy political favour for President Buhari in the South West, the administration accepted representations made for changing Democracy Day to June 12 and honouring Abiola. Democracy Day was shifted to June 12 and Chief Abiola was given the second highest honour of Grand Commander of Nigeria (GCON) posthumously with his Vice President, Kingibe also being given the same title. It was a masterstroke as the President sought to lay the ghost of June 12 to rest.

Political analysts agree that it was a golden move. Abiola’s first son Kola accepted the honour on behalf of the family and thanked the federal government for the honour. It should also not be forgotten that all the Governors that held sway in Ogun State, Chief Abiola’s home state celebrated June 12 as Democracy Day even when General Obasanjo was openly against the idea. Those Governors were men of honour who felt that even if Nigeria refused to honour Abiola, his own state would not do so. His memory was therefore honored with public lectures mainly on democracy and the day declared a public holiday.

This year, May 29th has come and gone and was not marked in any significant way. The government said that rather June 12, 2020 will be Democracy Day to honour the memory of the man who paid the supreme price for the democracy the nation now formally enjoys. It will also be a public holiday with public lectures. The change of government or hand over date for a new administration to come into office will nonetheless remain May 29.

Now whether the recognition of June 12 as Democracy day and National honour for Abiola will assuage the ghost of June 12 1993 Presidential election remains to be seen. That election, adjudged the fairest and freest election in Nigeria, hasn’t been repeated since then. Rather, about all elections since then have been so acrimonious to such an extent that the incumbent President, who had been a serial loser before 2015, had repeatedly challenged all of his losses. It’s also in line with this tradition and no wonder indeed that his opponent in the 2019 election, Alhaji Atiku Abubakar said that the election of last year was equally massively rigged. Unfortunately, for him the Supreme Court disagreed with his view and returned President Buhari as having satisfied the requirements of the law and was therefore duly elected. Heads, tails, warts and all, the bugle march of Nigerian democracy rolls on.