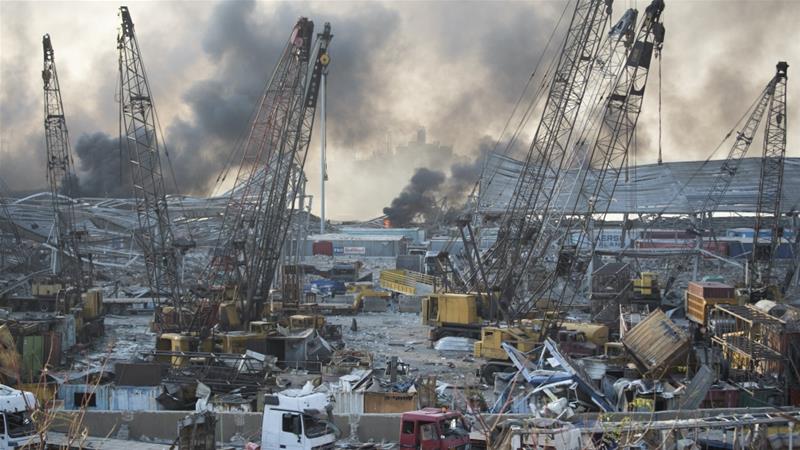 Three things we learned from the catastrophic explosion at Beirut port in Lebanon that killed more than 130 people, injured about 5,000 and made over 300,000 homeless. Between Faysal Itani’s NYTimes letter to the editor, Maria Vasilyeva Reuters’ report and other newspapers, the picture is that of state failure. Simple.

1. State of Affairs of the Country Prior to the Explosion – decades of rot at every level of the country’s institutions caused the explosion, not a single act.
• It is a country deeply divided by politics, religion and history.
• The country’s port is prime real estate for political and criminal factions of the ruling coalition and militias.
• Multiple security agencies with different levels of competence (and different political allegiances) control various aspects of their operations.
• Recruitment in the civilian bureaucracy is dictated by political or sectarian quotas.
• There is a pervasive culture of negligence, petty corruption and blame-shifting that are endemic to the country’s bureaucracy.
• The accident was foretold, but ignored.
• The country’s currency has collapsed, a problem that is itself a result of years of mismanagement and corruption.
• People can no longer buy fuel, food and medicine as citizens have seen their savings wiped out and their purchasing power disappear.
• A new vocabulary appeared among even the optimists to describe the country, words like “doomed” and “hopeless.”
• The catastrophe, while exceptionally severe, is the result of business as usual in the country.

2. Reaction and What to Come – All these are overseen by a political class defined by its incompetence and contempt for the public good.
• Shock will inevitably turn to anger.
• Besides the immediate loss of lives and property, critical infrastructures have been damaged and the population will suffer the consequences for years to come.
• The politicians are well practiced in shifting blames.
• People do not expect many — if any — high-level resignations or admissions of responsibility.
• Will there be a revolution? An uprising of anger? Any revolutionary impulse would have to compete with tribal, sectarian and ideological affiliations. These matter in the country, just as much as the facts.
• Even if a single official version of the port incident is presented (and even if it is true), some will not believe it.
• Paradoxically, our distrust of our politicians makes it harder to unite against them.
• It is difficult to imagine a concerted, sustained national movement because it has never materialized.
• More than an official version of what happened is bound to emerge.

3. Eerie similarity and difference between the countries – If the foregoing read eerily familiar to Nigerians, it is because Lebanon is similar to their country, and the state of affairs there, a close match for ours. That should alarm us. Unfortunately, the two countries are similar in all possible negative ways, but different when we wish they were not.
• Lebanon has fought a civil war, perhaps more than 1, and have low-grade wars on many fronts.
• Lebanon boasts of ancient civilizations, is a cross-road of religions and people.
• The country is a colonial construct.
• Lebanon belongs to Club Med (Mediterranean), so, will get emergency aids provided by wealthy countries in the region/ club, Nigeria does not.
• Lebanon enjoys strong client-state relationship with some neighbors, Nigeria does not.