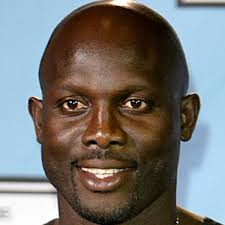 Frenetic horse-trading going on ahead of Boxing Day ’bout!’ Odds may presently now favour ex-footballer and flagbearer of the Congress for Democratic Change, George Oppong Weah to clinch the run-off contest for the Liberian presidency following his reported endorsement by the camp of Councillor Charles Brumskine.

Brumskine, who had contested the October 10 polls himself on the platform of his Liberty Party,was the chief litigant in the judicial tussle to invalidate the polls outcome.

Following the dismissal of that bid, he has now reportedly endorsed Weah for the run-off contest scheduled to hold on Boxing Day, December 26, 2017.

Given that Brumskine had found support for his initial judicial challenge in the Unity Party camp of serving Vice President, Joseph Boakai, talk on the street had favoured his throwing in his lot with the embattled Vice President who is clearly not getting all of the support that he needs from outgoing President Ellen Johnson-Sirleaf.

However, they did not reckon with the frenetic horse-trading and interests alignment and re-alignment that is going on in Liberia’s very convoluted political space, ahead of the Boxing Day ’bout.’

Weah, who had been a victim of this convoluted political arena in his earlier attempts at the presidency, has very clearly not been taking any chances in this regard, even as he is also believed to have also secured the ‘qualified endorsement’ of former rebel leader and senator, Prince Yormie Johnson who was also a candidate in the original contest.

Significantly also, he had also reached across the divide to ensure that his running mate is Jewell Howard-Taylor, former wife of notable Liberian warlord and ex-President, Charles Taylor.

And then there is also an expanded West African ring to the unfolding contest, given the number of trips that the leading candidates are covertly making to influential West African nations like Nigeria and Ghana and where the presidencies, business community, clergy and diaspora communities are being heavily lobbied to throw in diplomatic, financial, spiritual and strategic support for the aspirations of the two combatants.