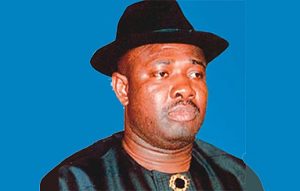 The Minister of State, Agriculture and Rural Development, Senator Heineken Lokpobiri has decried the continued prevalence of herdsmen/farmers crises in the country.

This is even as he has restated that the Federal Government is committed to zero food hunger by the year 2030.

This he says will be more so, if the present tempo of agricultural activities are sustained in the country.

Speaking at a symposium to mark the 2018 World Food Day with the title, “Our Actions are Our Future: A Zero Hunger World by 2030 is Possible,” in Abuja recently, Lokpobiri pledged that “in the next 12 years, Nigeria will join the League of Nations who would be able to feed the world.”

The minister was however quick to add that this projection can only be attainable if all Nigerians see and treat agriculture as serious business and not as a mere programme.

He stated that Nigeria must take advantage of its rapidly growing population to invest seriously in agriculture  and that the private sector must take the lead in this project while the Government provides the enabling environment, because Government has proven to be a bad business manager.

The World Food Day is celebrated each year on 16 October to commemorate the founding of the Organization in 1945. Events are organized in over 150 countries across the world, making it one of the most celebrated days of the UN calendar. These events promote worldwide awareness and action for those who suffer from hunger and for the need to ensure food security and nutritious diets for all.

Lokpobiri equally maintained that state governments must collectively demonstrate seriousness in agriculture by committing at least five percent of their budgets to agriculture, affirming that in this way, the country would be able to upscale its agricultural production.

This was as he commended the efforts of some States like Kebbi, Ebonyi, Zamfara, Ogun, etc in boosting their agricultural output and urged other states of the federation to emulate the same examples because it is only collectively that Nigeria will achieve the set target.

According to the minister, if Nigeria is able to feed itself, it would have been able to solve the issue of hunger and malnutrition in the black race and by extension Africa, which is, “a bold step in guaranteeing food for all in the world.”

The minister expressed his worry that if we do not achieve the zero hunger target, he foresaw a situation where, “people will be eating food and it will be snatched away from them forcefully by other hungry citizens.”

He said it is an established fact that the world has made unbelievable progress in the fight against hunger, which has led to the decline in the number of hungry people in the world, but regretted that this success story is also being threatened by the growing global population.

This is also as Lokpobiri expressed concerns that the resolve for Food self sufficiency may be hampered by the current herdsmen/farmers crises in some northern parts of the country.

“Prolonged crisis, especially in the north eastern part and other parts of the country that have experienced incessant clashes of herdsmen and farmers is also an issue of concern,” the minister said.

Contributing, Country Representative of the Food and Agriculture Organisation (FAO) in Nigeria, Suffyan Koroma stated that over the past forty years, FAO in Nigeria has been working closely with the Government of Nigeria to advance sustainable agriculture and food systems with great optimism towards achieving Zero Hunger in the country.

He appreciated the continued commitment of the Government of Nigeria in forging strong partnerships for nourishing, nurturing and growing a prosperous and peaceful Nigeria where all Nigerians thrive and contribute to socio-economic development.

According to him, achieving Zero Hunger is FAO’s shared commitment, which can be achieved through a Right based approach.