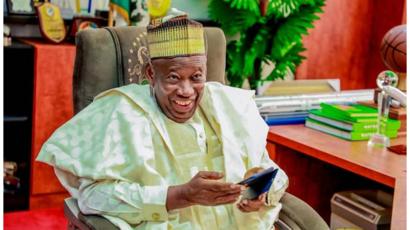 Nigeria: Hope rising for end to open cattle grazing
By John Eche
Hope is rising for an end to the decades-old practice of open cattle grazing in Nigeria which has more recently been identified as being at the base of herdsmen/farmers clashes in Nigeria and a rising spate of associated insecurity challenges, The Difference reports.
This is coming on the heels of remarks made by the Governor of Kano State, Dr. Abdullahi Umar Ganduje who has finally come to throw his weight behind the need to adopt less conflict-prone methods of cattle husbandry in the country.
“My advocacy is that we should abolish the transportation or trekking of herdsmen from the northern part of Nigeria to the middle belt and to the Southern part of Nigeria…There should be a law that will ban, otherwise we cannot control the conflicts between herdsmen and farmers and cannot control the cattle rustling which is affecting us greatly,” Gov. Ganduje said in Daura, Katsina State.
It will be recalled that clashes between herdsmen and farmers had grown to a most worrisome dimension in recent times. This had indeed come to be exacerbated by an identified loose affiliation between some of the herdsmen and marauding gangs of kidnappers and bandits that have spread themselves across forests all over the country.
In response to the threats posed by the practice, the Benue and Ekiti State Governments had in the past made laws to prohibit or curtail open grazing but those actions have been resisted by the Miyetti Allah Cattle Breeders Association of Nigeria and their backers on the ground that it was going to be injurious to their business. Other individuals and groups who had objected to the laws had premised their disagreement on the fact that it was inimical to the open grazing traditions of the nomadic Fulani.
However, the continued destruction of farmlands and assets of farmers and farming communities  as well as the association of some herdsmen with the heinous crimes of banditry and kidnapping has continued to bring them in conflict with locals on the path of their transhumance migrations.
Proposals have also been made for the cultivation of modern ranching methods as a permanent solution to the challenge.