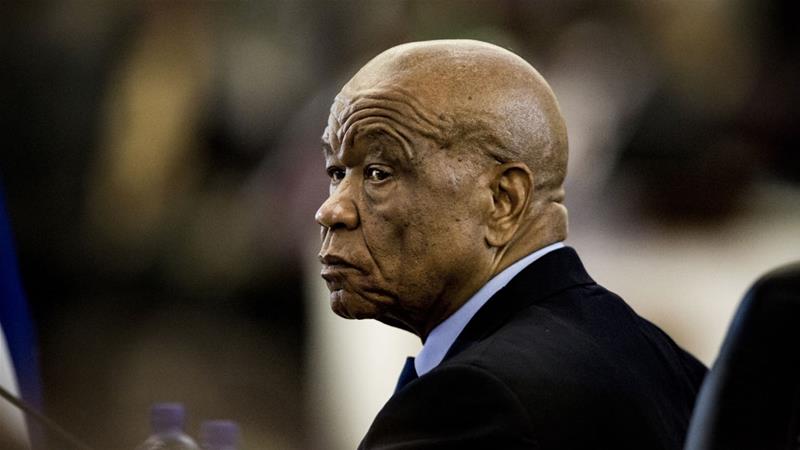 HOW NOT TO LEAVE OFFICE: THE THOMAS THABANE EXAMPLE

Reports that Thomas Thabane, the Prime Minister of Lesotho is going to step down from office come the 22nd of May, may not come as a surprise to those who have been following the happenings there. The scandal of a divorce and the gruesome murder of his ex-wife must have sapped the octogenarian of any energy left to continue in office.  The questions now have to do with determining the deeper facts of the case at hand: who sent the assassins after the late Lipolelo Thabane  and how are the Prime minister and his new wife going to put through with all the circumstantial evidence pointing at them going forward?

While the Basothos await the latest development on the murder scandal, the 80-year old Prime Minister and his latest wife, Maesiah Thabane would definitely have to answer several questions, including most particularly, that of who paid for the bullet that sniffed life out of the estranged first lady.  Another question they both must provide an answer to, would be if there were other persons who had wanted Lipolelo Thabane dead. The police might also demand some explanations on the short period between when the embattled first lady was assassinated and that of the Prime Minister’s marriage to Maesiah Thabane.

Quite suspiciously too, the coincidences of time and proximity of events surrounding the murder of the late Lipolelo Thabane and the marriage to Maesiah would on the surface of things place an onus on the latter to discharge. And to do this, the couple must be able to prove that they knew nothing about the tragic death of the late first lady, and that what happened was indeed a mere coincidence.

The octogenarian told the entire world that his stepping down from office was because he was no longer as energetic due to his old age. The reason given above would have been genuinely convincing if the ruckus over the sudden assassination of the late first lady was not laced with pulsating suspicion that indeed, the Prime Minister and his new wife knew something about the assassination. It is worrisome though that the electorateswho voted for him in the first place failed to see that a Prime Minister who was already 70years was far too old for the onerous demands and pressure of the tasks at hand. Needless mentioning that the embattled Prime Minister is already 80 years at this time of writing.

From the desert country of Algeria to the wet island of Madagascar, from oil-rich Angola to inflation-racked Zimbabwe, from the endowed, but pulverized Republic of Congo to war-torn Libya, stories of sit-tight leaders bear striking similitude across the African continent. Sit-tight leadership has been the bane of effective governance in Africa. It is now a political leitmotif that African leaders find it difficult to leave on the expiration of their term in office. In most cases, sections of the constitution are either manipulated or amended to keep a President in power against the will of the people.

Bouteflika Abdulaziz of Algeria, Muammar Gaddafi of libya, Bingu Wa Mutharikia of Malawi, Eyadema Gnassingbe of Togo, Omar Bongo of Gabon, Yahya Jammeh of the Gambia, Omar Al Bashir of Sudan, Joseph Kabila of Congo, late Mugabe of Zimbabwe and several others were a few examples of sit-tight President whose bloated egos kept them in office, and resultantly perched them against constitutional demands and the tenets of democracy.

Frankly, getting democracy right has been the bane in the march to secure honest and transparent leadership in Africa. The situation is such that one is tempted to ask if Africans are going to spend an entire life time studying democratic demands and all its appurtenances. It’s now 172 years since the first African country, Liberia, got her independence and the agonies of the unfortunate phenomenon of sit-tight leadership yet stares at us.

In spite of the huge investment on democracy, African leaders still find it absolutely difficult to abide by mutual agreements in that light. The excesses of sit-tight leaders in Africa have also been fuelled by a docile electorate that seemingly prefers hibernation to standing up for the right to good governance. It is not less to say that coups, counter coups, negotiations, renegotiation and dishonouring resolutions reached have been the bane of political leadership in Africa.

Whether on account of his alleged involvement in the death of his late wife, or on the ground of old age, the stepping down from office of Thomas Thabane is commendable. The office of a Prime Minister is cumbersome, and a reigning Prime Minister must be mentally, physically and  spiritually fit  to be able to live up to the demands of such office.