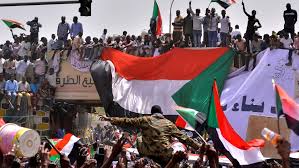 The ‘revolution’ in Sudan simply continues!

From a protest for freedom to a carnival for democracy but yet with an eye on the ball, Sudan has a lot to teach the peoples of Africa in terms of how to ultimately get the good life they have long yearned for.

Even as demonstrators in Khartoum vow to continue their sit-in until a civilian government is in place, Sudan’s military is being pushed to sacrifice more and more of its own constituency. After ditching one of their own on account of the resistance from the protesters, they are now going further to arrest members of the former government. They have equally pledged not to turn their guns against the people by dispersing protesters.

Also, they have conceded to the long-suffering civilian opposition in the country the right to pick the next prime minister and vowed to implement their choice.

It will be recalled that months of protests in Sudan led to the ouster and arrest of long-time leader Omar al-Bashir last Thursday.

When the military stepped in, the people were not pacified and demonstrators vowed to stay on the streets until there is an immediate move to civilian rule.

Even now, a sit-in is continuing outside the defence ministry in the capital Khartoum.

“We won’t appoint a PM. They’ll choose one,” he said, referring to opposition and protest groups who have been calling the shots since the ‘revolution’ began.

He also said the army would not remove protesters from their sit-in by force, but called on protesters “to let normal life resume” and stop setting up what he termed unauthorised roadblocks.

The military council also announced a number of reform actions, including, the appointment of new heads of the army and the police as well as the powerful National Intelligence and Security Service (NISS) whose leader, the dreaded and most feared Al-Bashir ally, General ‘Salah Gosh’ had been forced to resign at the weekend.

Also, committees are being set up to fight corruption, and to investigate the former ruling party, the ban on all media restrictions and censorship is being lifted, police and security officers detained for supporting protesters are being released while a review of diplomatic missions is being undertaken and  Sudan’s ambassadors to the US and to the UN in Geneva are being dismissed.

The protests had begun as a resistance to a rise in the cost of living in December even as inflation figures inched towards the most scary triple digit point, but soon developed into a wider call for the removal of Mr Bashir and his government.

This led to the military stepping in and removing and detaining the veteran leader after he had grossed nearly 30 years in power, and in most controversial circumstances too.

The coup leader, Defence Minister Awad Ibn Auf, then announced that the military would oversee a two-year transitional period followed by elections and imposed a three-month state of emergency.

But demonstrators vowed to stay in the streets regardless, demanding an immediate switch to civilian government.

Hedged in, Ibn Auf was then forced to stand down the next day, as did the feared security chief Gen Salah Gosh.

In a televised address on Saturday, Gen Burhan vowed to “uproot the regime”, pledging to respect human rights, end a night curfew, release political prisoners immediately, dissolve all provincial governments, try those who had killed demonstrators and tackle corruption.

However, the Sudan Professionals Association (SPA), which has been spearheading the demonstrations, said the council’s response “did not achieve any of the demands of the people” and urged protests to continue.

Among its demands are the restructuring of state security, the arrest of “corrupt leaders” and the dissolution of militias that operated under former President Bashir.

The whereabouts of Al-Bashir is currently unknown, but the coup leaders said he was in a secure place. He has been indicted on charges of war crimes and crimes against humanity in Darfur by the International Criminal Court.

But the military council has said it will not extradite him, although he could well be put on trial in Sudan.

In their response, Bashir’s National Congress Party on Saturday called his overthrow unconstitutional, and demanded that the military council release the party’s imprisoned members.

But their reaction is coming late in the day. Maj-Gen Shanto has said that the former ruling party would have no part in the civilian transitional government but could field candidates in the next elections. And he may very well have the support of the streets on this.